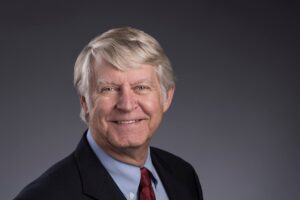 Scott Gibbs is the Interim President of the Cumbres & Toltec Scenic RR. He was appointed by Governor Polis as a Commissioner overseeing the RR in July 2021.

Gibbs is President of the Durango Railroad Historical Society. He coordinates operation of former D&RGW locomotive 315 on the Cumbres & Toltec Scenic Railroad and the Durango and Silverton Railroad. Locomotive 315 was restored to operation by the DRHS on August 24, 2007 after a 7-year long volunteer effort to bring the 1895 steam locomotive back to operational condition. Scott was responsible for the FRA Form 4 Engineering work on the Locomotive during the restoration efforts. He has also worked recently as a consultant for Lawrence Berkley National Laboratory and Los Alamos National Laboratory.

Scott retired to Durango from Los Alamos National Laboratory where he was the Deputy Laboratory Director for Mission Assurance. In this role, Gibbs provided strategic and tactical support in the areas of risk management and contract assurance. He regularly engaged with personnel from across the 11,000-person site in every capacity from science and engineering to operations. Gibbs had been asked to return to the Laboratory in 2017 to take on the newly created role which had been created for him by the Board of Los Alamos National Security.

In his previous nearly 30-year tenure at Los Alamos, he had served in a broad range of leadership roles in all areas of the Laboratory, including global security, operations, and weapons. Gibbs held four different Associate Director positions spanning operations, engineering and global security and retired in 2014, as Associate Director for Threat Identification and Response, managing a staff of 935 and an annual budget of more than $375 million, focusing on nonproliferation and counter proliferation R&D associated with weapons of mass effect, space systems applications, warfighter support, and intelligence analysis. Prior to his assignment in Threat Reduction, he managed the Laboratory’s Engineering Directorate, which comprised a $384 million budget and 1,250 direct staff.

He has published 15 scientific and technical papers, and has two patents for molybdenum disilicide alloy matrix composites