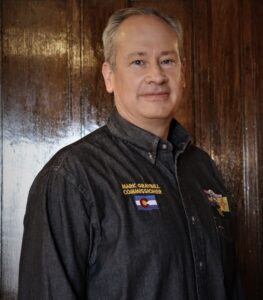 Mark Graybill who operates the Georgetown Loop Historic Mining and Railroad Park, brings a wealth of relevant experience to the Cumbres & Toltec Scenic Railroad Commission. He replaces Lucy Kaye of Silverthorne who resigned.

A Colorado native raised in Arvada, Colorado, Graybill graduated from the University of Colorado at Boulder with a major in history and a certificate in education in 1988.

He entered the business world shortly after graduation and in 1992 became Vice President and General Manager of Caboose Hobbies Inc. in Denver. In 2003 Graybill purchased his own store in Georgetown, Colorado and in 2006 he was asked to take over the contract to operate the gift stores for the Georgetown Loop Railroad.  In 2009, Graybill formed Historic Rail Adventures, LLC which assumed the entire operating contract for the Georgetown Loop Historic Mining and Railroad Park® under agreement with History Colorado.  The Historic Rail Adventures team has managed 4 steam engine rebuilds and numerous diesel locomotive and rail car rehabilitations allowing the railroad to more than double ridership and revenue since 2009.