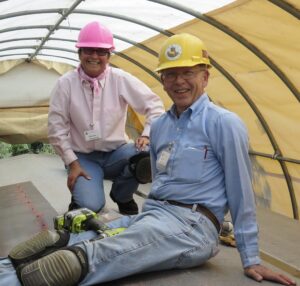 Bill Lock was appointed to the C&TSRR Commission on November 5, 2018.  Bill brings a historical background to the Commission, having been significantly involved with the Railroad since 1980.  Bill also brings a background of volunteer activities and he has served in many capacities in public and non-profit organizations.

While Bill was born and raised in the Midwest, he has been in Albuquerque, New Mexico for over 48 years.  He served as a teacher with the United States Army for two years in El Paso, Texas, where he first acquired a love for historic railroads (A&SMRR).  Bill graduated with a degree in Early American History from the College of William and Mary in Virginia and subsequently earned a law degree at Indiana University.  He has been a practicing attorney for over 48 years and is an ordained Deacon in the Anglican Church.

In 1981, Bill started doing volunteer work on the C&TSRR.  Bill served as an officer of the Railroad Club of New Mexico and on the Board of Directors of the Historical Society of New Mexico.  In 1988 after volunteer participation had grown to over 60 people during a work session, Bill incorporated the Friends of the Cumbres & Toltec Scenic Railroad, Inc., which now has over 2,000 members worldwide and accounts for over 25,000 hours of volunteer work annually donated to the Railroad.  Bill served as the initial President of the Friends for eight years and continues to serve on the Board of Directors.